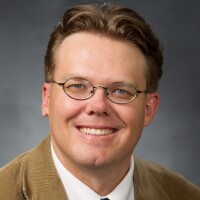 Nick Frederick was born in Provo, UT and raised in Delta, UT (Go Rabbits!) After returning from a mission in Brussels, Belgium he attended BYU where he received his B.A. in Classics and his M.A. in Comparative Studies. While completing his M.A. he taught part-time for the Classics department and for the Religion department at BYU. He then attended Claremont Graduate University, where he completed a Ph.D. in the History of Christianity with an emphasis in Mormon Studies, after which he returned to BYU. His research focuses primarily on the intertextual relationship between the text of the Bible and Mormon scripture. He enjoys teaching courses on the Book of Mormon and the New Testament, particularly the writings of Paul and the Book of Revelation. He has been married to Julie Parker Frederick for sixteen years and is the father of four children, Miranda, Samuel, Kassandra and Madelyn. He is passionate about all sports, especially baseball, and enjoys watching old films and reading good books.