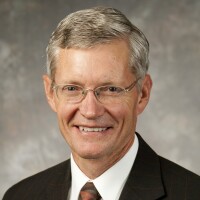 Bio: I was born and raised in the desert area of Southern California. I was the fourth of ten children and raised in an active LDS family. I served a mission in Vienna, Austria. I graduated from BYU in German and Health Science. Subsequently I received an M.A. from BYU and a Ph.D. from the University of Utah. My doctoral studies focused on the history and formation of universities in America, with particular emphasis on the influence of religion in higher education.

Areas of Expertise: The secularization of higher education, the moral foundations of knowledge, academic freedom, and broad-based studies in all ancient scripture areas.

Areas of Research: Currently I am researching the physical events (miracles) in the production of the Book of Mormon. A second project that I am beginning is a history of change within the Community of Christ Church, formerly called the Reorganized Church of Jesus Christ of Latter-day Saints.

Languages: I am fluent in German and can read basic Spanish.