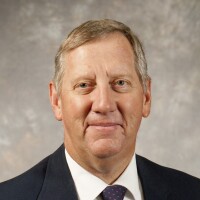 Bio: Born in Jacksonville, Florida as the tenth of fourteen children. Received Eagle in Scouting and graduated from early morning seminary. Served a mission in the California South Mission before returning to studies at Brigham Young University. Master's Degree in American Western History, with an emphasis in LDS Pioneer History. Doctorate in Educational Leadership with emphasis in LDS Academies and Church Education. Married to the former Mary Farnsworth of Beaver Co., Utah, and we are the parents of eight children.

Courses Taught: Doctrine and Covenants, Teachings of the Living Prophets, LDS History, The International Church, Men and Women of Mormondom