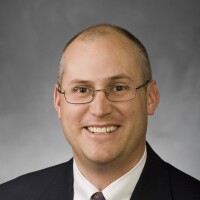 Bio: Born in Coeur d'Alene, Idaho, and raised in Pocatello, Idaho, and Sandy, Utah. Served full-time mission in Pennsylvania Pittsburgh Mission. Married Erin Pinney in 1997 and had four children: Emma, Jack, Samuel, and Tabitha. Received a BA in international relations from Brigham Young University; an MA in ancient Near Eastern studies from BYU; an MA and a PhD in Northwest Semitics from the University of Chicago. Worked as a part-time instructor before becoming an assistant professor in 2007. He advanced to the rank of professor in 2020.

Areas of Research: Cultural and sociological influences in the Book of Mormon; Use of ritual in ancient and contemporary contexts; doctrines of ascension and theosis in ancient Near East and Late Antiquity; comparative cosmologies